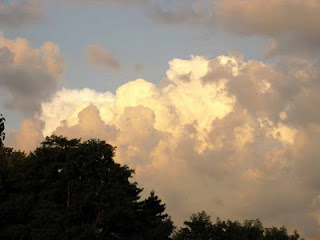 I just love cloud watching,
ever changing, always captivating.
This is the same photo with a vignette . . .
much more dramatic . . . 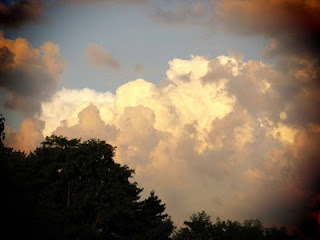 Food for thought from "Time and the Art of Living" by Robert Grudin,
chapters 5 and 6:
V.4  Generally, experience is analyzed in either of two ways:
mechanistically (in terms of cause and effect) or teleologically
(in terms of goal or purpose).

V.7  As events pass into history, they settle into themselves and
compose themselves in a smaller context.

V.9  While daily journalism proliferates itself by exaggerating emergencies
and ignoring continuity, weekly journalism perverts continuity by
fabricating the illusion of grand historical shape and movement.

V.12  . . . for in a way that few moderns seem to understand,
the mind is as limited by what it rebels against as it is by what it accepts.

V.22  One cannot plan to be lucky; but sensible planning and action
make one accessible to luck.

VI.2  An axiom which seems implicit in almost every traditional moral code
is that every action has a consequence.  A second axiom, more
debatable but nonetheless intrinsic to this study, is that action is continuous.
Action, in other words, includes what we commonly call inaction; and
consequence springs as much from our refusal to act as from our willed
deeds themselves.  This is nowhere as apparent as in our personal
relationships.  We lose what is valuable in these – love, joy, communality –
less through conflict and tragedy than through long series of shadowy
and often unconscious refusals.  Withdrawing, forgetting, falling out of touch,
ignoring or avoiding . . . destroy more relationships than death or anger
and tend to isolate their perpetrators.