What I've been up to ... recovering a footstool.

This is a footstool originally from Vince's Uncle Ray.
I have no idea how it came to us, but we've had it for decades.

I forgot to take a "before" photo,
but I still had the fabric so I laid it on the completed footstool. 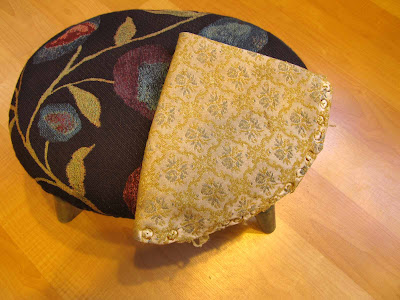 An interesting note on the bottom of this stool
says that Uncle Ray re-covered it in 1981.
He must have used the gold and blue fabric I removed.
It feels "right" to update the things we already own,
especially when there is a family history.

Using the removed fabric as a guide, cut the new fabric.
If you are adding fabric over the existing fabric,
turn the footstool upside down and add several inches all around the shape.
Tape (masking or painter's) the edges so the fabric won't fray.
If you have a sewing machine, run a stitched line around the edge instead.

Turn it over for a visual check.
Keep adding staples a few at a time
until all the fabric on the bottom is stapled in place.
Fold the fabric around the legs as necessary.
Just use your judgement.