Anne says I get much too close
when photographing food
and I think she's right, but here it is anyway . . . 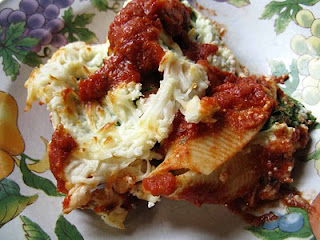 Based on a recipe in "Real Simple".
Spinach and ricotta-stuffed shells
20   jumbo         pasta shells
1    24-ounce jar  marinara sauce
1    24-ounce      ricotta cheese
2    cups          baby spinach, washed and chopped
1/2  cup           shredded Parmesan
1    cup           shredded mozzarella
1/2  teaspoon      salt
1/4  teaspoon      pepper
Pre-heat oven to 400 degrees.
Cook shells (adding a few extra for breakage).
Combine the ricotta, spinach, Parmesan, salt and pepper.
Spread the marinara in the bottom of an oven-and-broiler-proof
baking dish. (I used a cast iron skillet)
When the shells are done cooking, cool under running water.
Spoon the cheese and spinach mixture into the shells
and place on top of the sauce in the baking dish.
Sprinkle with mozzarella.
Bake 10-12 minutes.
Switch to broil for a couple of minutes until mozzarella melts.
After dipping out the shells,
spoon some marinara over the shells.
Serve with a salad.